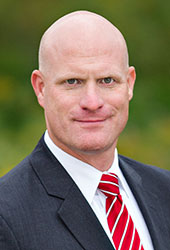 Steve Massey joined Westfields Hospital & Clinic as President and Chief Executive Officer in August 2011. He has led the hospital through a number of strategic initiatives including the joining of Westfields Hospital and New Richmond Clinic to form Westfields Hospital & Clinic in 2013. Before taking on his current role, Massey served as Chief Financial Officer at Osceola (Wis.) Medical Center. He also held prior leadership positions at Allina Health and Fairview Health Services. Massey was named to Becker’s Hospital Review’s “hospital and health system CEOs to know” in 2014 and 2016.” In 2015 he was one of six Wisconsin hospital and health system CEOs recognized in Becker’s list of “50 rural hospital CEOs to know.”

He received his undergraduate degree from Missouri State University, Springfield. He has a Master’s in Healthcare Administration from University of Minnesota, Minneapolis. Massey and his wife, Nicole, and their three boys live in New Richmond.  He serves on the New Richmond Chamber of Commerce board of directors, most recently as President.  He also serves on the New Richmond Youth Hockey Association Board and volunteers at Grace Place, a local transitional housing organization.